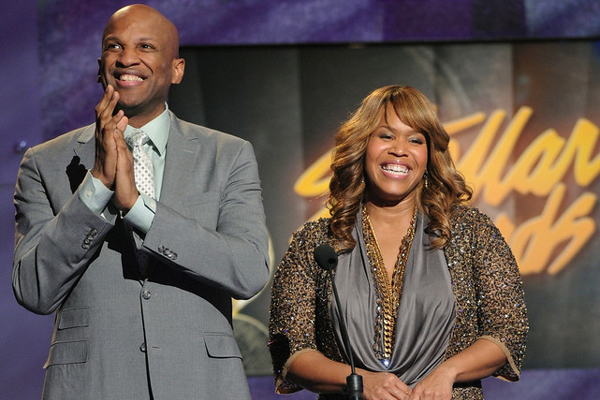 Does 45 need prayers? Yes. Do I need to pray for him? Eh…I guess. Prayer warriors are being solicited right now for a prayer service for 45. But somehow, I don’t think a prayer circle will change the heart of a 70-year-old fart set in his ways. Maybe a deliverance service? Yet, I’m sure VP Mike Pence tried a little “shock therapy,” and that still hasn’t worked. Even if God miraculously changed the heart of 45, it still wouldn’t make him a competent leader. So, why do Christian leaders like Donnie McClurkin and Tina Campbell of Mary Mary keep asking me to pray for him?

Recently, Pastor Donnie McClurkin basically said that protesting creates a “false sense of involvement.” What’s a more truthful way of involvement in his opinion? Prayer. The irony, right? Even Tina Campbell, the sister of Erica Campbell to whom he was speaking with, mentioned something similar too. Why do I have to pray for some “billionaire” man with the world and fake news at his fingertips. Instead, let’s pray for the people who’ll be directly impacted by a 45 presidency. Let’s pray for the Muslims, the LGBTQ, women, our children and even the 45 voters (who are about to be screwed more than a video vixen named Superhead with no Vaseline…well, you do reap what you sow). Let’s pray for everybody else besides 45. How bout dah?

It’s amazing how passive religious institutions have become when it comes to civil activism. These institutions have drastically changed from the days of street activism via Martin Luther King and the SCLC. This passive state is a move to not only accept things as they are but to also keep things the way they are. These institutions and their leaders only speak up when things challenge their sense of normalcy. Remember the Chick-fil-a fiasco? Like, standing in line to buy some chicken will stop Big Freedia from taking it down the windpipe.

Plus, why is there such a push now to give less than mediocre white men so many chances? This speaks to certain church leader’s need to uphold white supremacy. Why? Because it upholds their superiority over the LGBTQ community, the Muslim community, women and anyone else they don’t like. It’s the same reason Vicki Yohe, with a large Black audience, can bypass 45’s transgressions and claim he bought Jesus back to the Whitehouse. Therefore, I’m playing like Kirk Franklin and blasting my nina. …Well, that might be too far, but I will utilize these prayer hands.

You see, Black church folk seem to forget this one passage, “Faith without works is dead.” You can pray until your knee caps are raw and your tonsils swell up. But if you don’t put action behind it, it doesn’t mean anything. It’s time to fight and follow the actions of religious leaders like Rev. William Barber. It’s time to keep our foot on Trump’s the devil’s neck and stop hiding behind abortion and the “sanctity” of marriage to uphold your political bigotry. Speak up for healthcare for the poor, instead of against excessive governmental spending. Speak up for children stuck in the foster care system, instead of against a woman’s right to choose. Speak up for the mental health and the safety of the LGBTQ community, instead of against gay marriage. Speak up for the right for all people to practice their faith instead of against every other religion’s that’s not your own. And if you ask me to pray for 45, duck because you gon’ get these prayer hands.

Prayer can be of great solace to the individual, but changing the world requires us to take action.